Until I devoted a chapter to the subject in one of my books, Dynamite Treason and Plot: Terrorism in Victorian and Edwardian London, The History Press 2011, hardly any mention was to be found in any published books of suffragette terrorism. I later wrote a book entirely about the suffragettes and their use of bombing and arson;  Suffragette Bombers: Britain's Forgotten Terrorists, ​Pen & Sword 2014. This was a sober and factual account of what actions had been taken by the suffragettes between 1912 and 1914. One author, who had researched a militant suffragette as part of her PhD studies, decided to pretend that nothing had ever been written about suffragettes and their terrorist activities and in April 2018, her book Death in Ten Minutes was published; Hodder & Stoughton 2018. Although the book was listed as being non-fiction, the author, Fern Riddell, had actually produced a bizarre fantasy which owed more to her imagination than it did any historical research.
​     The above claim may seem a little harsh and possibly even extravagant and so we ​ had better examine the book in a little detail. On the evening of 6th May 1913, a small bomb was left in St Paul's Cathedral in London. It did not explode and was defused the next morning. The device may be seen today in the City of London Police Museum. Here is how Fern Riddell treats this incident in her book;

'Suddenly, a deep boom sounds from the direction of St Paul's, and frightened birds fill the air. A man struggles to keep control of his carthorse as a growing surge of people rush past, shouting, 'A bomb! A bomb! They put a bomb in St Paul's!'

This is sheer fantasy; no bomb exploded in or near St Paul's Cathedral in 1913, when this passage is explicitly set. Here is another example. The same applies to another explosion in Manchester on November 11th 1913, when the author of the book claims that a greenhouse in Manchester was ‘reduced to rubble’ and left a ‘twisted ruin’. In fact, no damage at all was done to the building, other than a few windows being broken. I do not ask anybody to take my word for this; here is the greenhouse a few hours after a glorified firework was set of nearby; 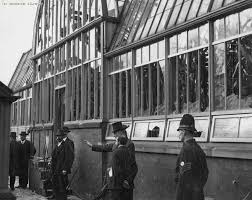